PETA UK sent a letter to Pet Shop Boys Chris Lowe and Neil Tennant asking the pop duo to change their name in an effort to raise awareness about cruelty in the pet trade. They posted it to their website. 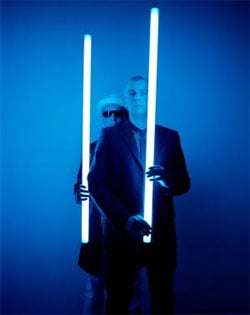 "You have many loyal fans of the Pet Shop Boys here at PETA. We have a request that may at first seem bizarre, but we hope that after considering the following facts, you will understand why we are asking this of you: will you please consider changing your name from the Pet Shop Boys to the Rescue Shelter Boys?

Most dogs and cats sold in pet shops are sourced from profit-hungry breeders who may have bred them in cramped, filthy conditions. With an emphasis on quantity rather than quality, unmonitored genetic defects and personality disorders pass from one generation of puppies and kittens to the next. Many animals end up with abnormalities that result in both heartbreak and high veterinary bills for the unsuspecting people who buy them. For every bird who reaches a pet shop, three others have died during capture, confinement and transportation. Hamsters, mice and other rodents are often bred by the pet shops themselves, leading to inbreeding, genetic weaknesses, physical deformities and behavioural disorders.

Most pet-shop animals are kept in cages or runs that are far too small for their needs. Exercise is minimal, and they often never leave their cages until the day that they are sold. Nocturnal animals are displayed throughout the day under glaring lights. Predators, such as snakes, may be displayed alongside their prey. No screening is done to ensure the suitability of prospective guardians.

By agreeing to change your name to the Rescue Shelter Boys, you would help raise awareness about the cruelty involved in the pet trade and encourage your millions of fans to consider giving a home to an abandoned or unwanted animal from an animal shelter. So, what do you say?"

The Pet Shop Boys responded that the request is something they are "unable to agree to but nonetheless think raises an issue worth thinking about" and posted a link directing people to find information back at PETA.

Upon inquiry, PETA's Senior VP Dan Mathews told Towleroad: "Neil Tennant shows that the Pet Shop Boys are just as smart as their lyrics and appreciate PETA's creative ways of bringing issues to the public."