Rachel Maddow never owned a television until recently after she and her partner Susan Mikula had too much to drink and went on an Amazon shopping spree: 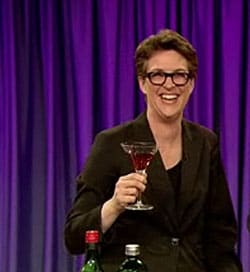 "I got drunk last Thursday and ordered one on Amazon!(Laughs) Susan and I ordered take-out Chinese and I made cocktails andthen somehow it just happened. I mean, it wasn't like we were on sometotal bender or something—it was a weeknight—but I woke up the nextmorning and there was the confirmation email stating that we had indeedbought a $400 television. Of course, since we were drunk, we had itshipped to the wrong place, so now we have to get this giant box allthe way to NYC from our place up in Massachusetts and figure out how toinstall it. Neither of us have had a TV in years and years. The lasttime I lived in a house with the TV was in 1990, when I moved out of myparent's house to go to college. Now there's a giant box with a TVsitting in Susan's art studio waiting for us."

Maddow is a self-described "mean dork" about drinking. Late last month she bullied Jimmy Fallon into drinking a more manly drink, the Bijou.

And she'll teach you how to make it, AFTER THE JUMP…