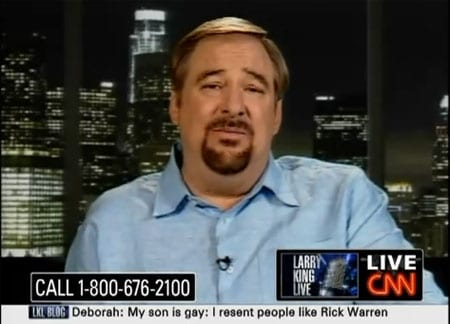 Pastor Rick Warren appeared on Larry King Live last night and King asked him about the controversy that erupted when Barack Obama asked him to deliver the invocation at the inauguration.

Said Warren: "You know, Larry, there was a story within a story that never gottold. In the first place, I am not an anti-gay or anti-gay marriageactivist. I never have been, never will be. During the wholeProposition 8 thing, I never once went to a meeting, never once issueda statement, never — never once even gave an endorsement in the twoyears Prop 8 was going. The week before the — the vote, somebody in my church said, Pastor Rick, what — what do you think about this? And I sent a note to my own members that said, I actually believe thatmarriage is — really should be defined, that that definition should be– say between a man and a woman. 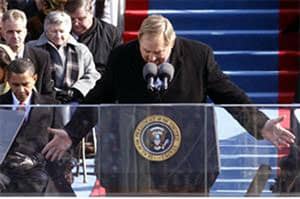 "And then all of a sudden outof it, they made me, you know, something that I really wasn't. And Iactually — there were a number of things that were put out. I wrote toall my gay friends — the leaders that I knew — and actuallyapologized to them. That never got out. There were some thingssaid that — you know, everybody should have 10 percent grace when theysay public statements. And I was asked a question that made it soundlike I equated gay marriage with pedophilia or incest, which Iabsolutely do not believe. And I actually announced that. All of the criticism came from people that didn't know me. Not a single criticism came from any gay leader who knows meand knows that for years, we've been working together on AIDS issuesand all these other things."

King later asked Warren whether or not he "encouraged his flock" to vote 'yes' on Proposition 8.

Said Warren: "Oh, yes. You know, I don't think that the definition of marriage should be changed. Yes. I just never campaigned…I never campaigned for it. I never — I'm not an anti-gayactivist — never have been. Never participated in a single event. Ijust simply made a note in a newsletter. And, of course, everything Iwrite it's — it's (INAUDIBLE). It's very low [on my list of issues]. In fact, I am working with a number ofgay organizations on issues that we care about, in saving lives."