Politico received an email from a Rick Warren aide explaining why he bowed out at the last moment from his This Week appearance with George Stephanopoulos. The aide said that Easter was like the Super Bowl for Warren and he was under the weather from preparing for the many services he was to preach. Plus, he had inhaled fumes from a new pulpit: 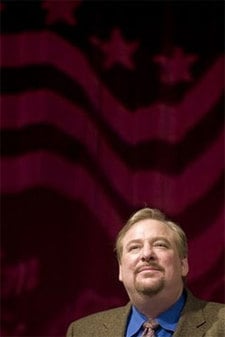 “My understanding was that Dr. Warren’s condition was related to
fatigue and exhaustion — which affected his voice — exacerbated by
inhalation of fumes from the newly refurbished (but still drying)
pulpit used in the televised services the previous night. After
initially informing George Stephanopoulos of his inability to pre-tape
on Saturday, I put him directly in touch with his chief-of-staff after
doctor consultation to pursue the remote possibility of an early
[Sunday] AM pre-tape. That turned out to not be a possibility as he had
to cancel half of his sermons today, though he was able to preach
several of the six services at which he was scheduled to preach…“There has been a lot of blog chatter trying to connect the dots with
the interviews this weekend and comments Dr. Warren made on CNN Larry
King Live, but his cancellations were related to health and fatigue."

And the aide said that Warren had been responding to the Larry King Prop 8 controversy with this statement on a per-inquiry basis:

“Throughout his pastoral ministry spanning nearly 30 years, Pastor
Warren has remained committed to the biblical definition of marriage as
between one man and one woman, for life — a position held by most
fellow Evangelical pastors. He has further stressed that for 5,000
years, EVERY culture and EVERY religion has maintained this worldview.

“When Pastor Warren told Larry King that he never campaigned for
California's Proposition 8, he was referring to not participating in
the official two-year organized advocacy effort specific to the ballot
initiative in that state, based on his focus and leadership on other
compassion issues. Because he's a pastor, not an activist, in response
to inquiries from church members, he issued an email and video message
to his congregation days before the election confirming where he and
Saddleback Church stood on this issue.

“During the King interview, Pastor Warren also referenced a letter of
apology that he sent to gay leaders whom he knew personally. However,
that mea culpa was not with respect to his statements or position on
Proposition 8 nor the biblical worldview on marriage. Rather, he
apologized for his comments in an earlier Beliefnet interview
expressing his concern about expanding or redefining the definition of
marriage beyond a husband-wife relationship, during which he
unintentionally and regrettably gave the impression that consensual
adult same sex relationships were equivalent to incest or pedophilia.”