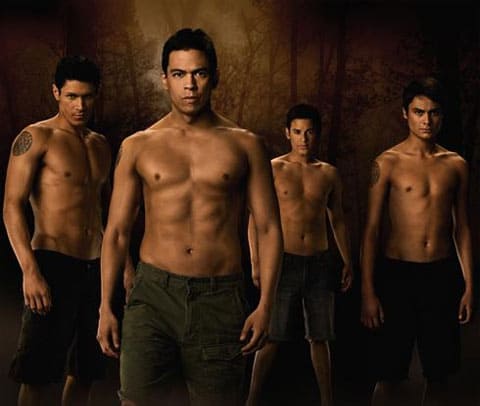 USA Today presents the first look at the wolf pack from the Twilight sequel New Moon:

"Four actors — Alex Meraz, Chaske Spencer, Bronson
Pelletier, and Kiowa Gordon (left to right)  all with Native American heritage — join Taylor Lautner, who returns as a hairier, scarier Jacob Black…Among wolf pack job requirements: the ability to
work half-naked no matter what the weather in the Vancouver, B.C.,
area, where the film has been shooting for several weeks. 'It's not pleasant for the actors,' says
director Chris Weitz. "But they have all been good-natured. They show
up on location in drenching, cold rain, and I say, 'OK, off with the
robes.'…The Twilight sequel is filming now, and
between takes, the actors usually are working out with barbells, doing
push-ups or chowing down on steak, Weitz says. 'They went through wolf
camp together, and they are in constant training. It paid off as a
bonding thing for them and helped them to get to know one another. They
drove each other to get more buff.' No amount of weightlifting, however, would allow
them to act out the wolf portion of their performances; the beasts are
about the size of horses and race around on all fours."

You  may remember Lautner from his bicep flex-off with Ross the Intern.