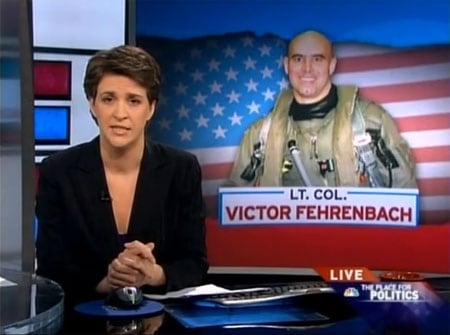 Rachel Maddow reports on Decorated Lt. Colonel Victor Fehrenbach, an F-15 fighter pilot and 18-year veteran of the Air Force. He is ready to deply again, but the military is firing him under "Don'tAsk, Don't Tell", two years short of being able to retire with fullpension benefits. 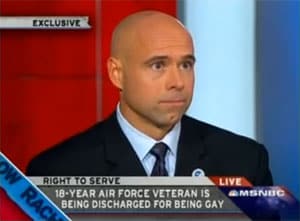 Servicemember's Legal Deffense Network executive director Aubrey Sarvis writes: "Lieutenant Colonel Victor J. Fehrenbach, a fighter weapons systemsofficer, has been flying the F-15E Strike Eagle since 1998. He hasflown numerous missions against Taliban and al-Qaida targets, includingthe longest combat mission in his squadron's history. On that infamousSeptember 11, 2001, Lt. Col. Fehrenbach was handpicked to fly sortiesabove the nation's capital. Later he flew combat missions in Iraq andAfghanistan. He has received at least 30 awards and decorationsincluding nine air medals, one of them for heroism, as well as campaignmedals for Kosovo, Afghanistan, and Iraq. He is now a flight instructorin Idaho, where he has passed on his skills to more than 300 futureNavy, Marine Corps, and Air Force weapons systems officers. Since 1987, when Fehrenbach entered Notre Dame on a full Air ForceROTC scholarship, the government has invested twenty-five milliondollars in training and equipping him to serve his country, which hehas done with what anyone would agree was great distinction. He comesfrom a military family. His father was a retired Air Force lieutenantcolonel, his mother an Air Force nurse and captain. Lt. Col. Fehrenbachhas honored that tradition."

A $25 million dollar investment. The military is throwing it away over his sexuality.

Said Fehrenbach to Maddow: "About 4,000 people are assigned to Mountain Home Air Force Base, andonly about 10 people on the entire base even knew of my case up untilthis very moment. Those were my immediate chain of command,a couple of attorneys in the legal office, and a couple of officers inthe Office of Special Investigations. Not one single person that I'massigned with in my squadron, or that I fly with in my fightersquadron, knew about this case until this moment."

Watch Maddow's report, and recent Obama administration updates on DADT, AFTER THE JUMP… 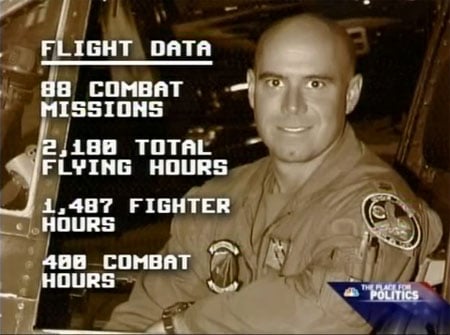 Previous Post: « Report: California Proposition 8 Decision Coming Down on Thursday
Next Post: Did Ted Haggard Vote for the Christian or the (Alleged) Gay on Idol? »