The second major rally in four months has been held by a gay and lesbian activist group in Lebanon, Calcutta News reports: 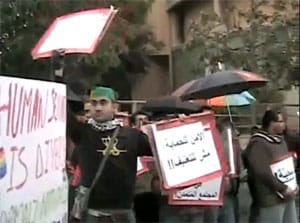 "Gay men and women in Lebanon have taken to the streets in a brave effort to show the rainbow flag. Protesters on Sunday carried banners and unfurled flags at a sit-in for gays and lesbians in Beirut. The region's only overt gay rights organisation, Helem, which isbased in Lebanon, is preparing for a campaign to overturn the law thatmakes homosexuality illegal. Helem has been responsible for organising the only overt gay rights protests ever to be held in the Arab world. In February, nearly two dozen gays and lesbians waved rainbow flagsin a downtown Beirut square, carrying banners demanding homosexualrights.  They were protesting what they said was the beating of two gay men by police.  Helem is now set to challenge Lebanon's Article 534, which prohibits sexual relations that 'contradict the laws of nature.' The region has seen a recent spike in killings of homosexuals, blamed by some on the influence of Islamic extremists."

The AP looks at the gay rights struggle in Lebanon.

The screencap above is from a clip of February's protest, which you can view, AFTER THE JUMP...