The Jamaica Plain section of Boston was the site of a celebration marking five years since same-sex marriage was legalized in Massachusetts, NECN reports: 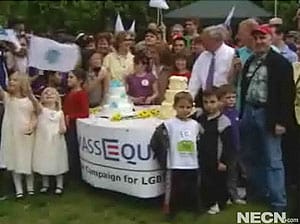 "The event was hosted by the group MassEquality. The couples received small spruce trees as a symbol of their fifth, or wood anniversary."

A new study reveals that more than 12,000 same-sex marriages since 2004 have contributed $111 million to the state's economy: "The report from the WilliamsInstitute at the UCLA School of Law says a typical same-sex couplespent about $7,400 on their wedding, with one in ten couples spendingover $20,000. A secondstudy by the same group found that young, highly educated people insame-sex relationships were 2.5 times more likely to move toMassachusetts after 2004 than before gay marriage became legal."

Video report on the fifth anniversary celebration, AFTER THE JUMP…