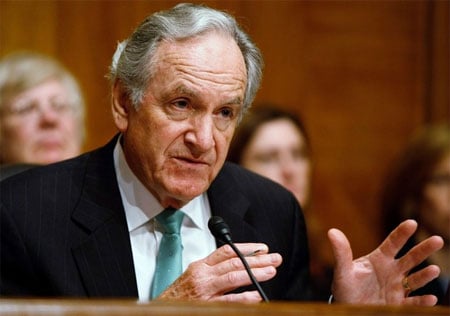 Iowa Senator Tom Harkin appeared on Iowa Public Television's Iowa Press program over the weekend and told the hosts that his perspective has changed since he voted for the Defense of Marriage Act in 1998. Harkin called the Iowa Supreme Court's decision on marriage equality "enlightening" and said he would vote against any proposed constitutional amendment banning same-sex marriage, though he believes the issue will "fade" before it gets to voters.

Said Harkin: "We all grow as we get older and we learn things and we become moresensitive to people and people's lives and the more I've looked at thatI've grown to think differently about how people, how we should liveand I guess I'm at the point of live and let live."

Read the transcript of Harkin's marriage discussion, AFTER THE JUMP…

Glover: We've got way too many questions and way too little time.  An issue that has been injected into this state by the state Supreme Court is gay marriage.  Somebody who voted for the Defense of Marriage Act, what do you think about that ruling?  What do you think the political fallout will be?

Harkin: I read the judge's ruling on that and I comment to everyone read Judge Cady's decision on that, it's very enlightening.  I did not know, for example, that in 1839 the Iowa Territorial Supreme Court banned slavery, that in 1869, 100 years prior to Brown versus the Board of Education the Iowa Supreme Court banned segregation in schools or that Iowa before the turn of the previous century admitted a woman to the bar.  I'm sure those were all controversial issues at the time.  But it seems to me Iowa has always been in the forefront of extending civil rights to people, always in the forefront of this.  This, again, is just another step in that march that we've had in Iowa and I think now you see a lot of other states falling in line, just here in the last week.

Glover: What are the politics of it?  A lot of republicans will say game, set, match, 2010 will be all about gay marriage and we'll win.

Harkin: No, I just disagree, I just disagree.  I think that like a lot of these earlier things that happened a couple years from now people will look back and say what was the fuss about?  Nothing.  I think 2010 the elections will hinge on the economy, healthcare reform, what we're doing in energy and whether families are doing better, whether they can see that their kids are going to have a better education, whether their lives are getting better or not, it's not going to have one bit to do with gay marriage.

Henderson: So, if you as an Iowa voter are presented with a state constitutional amendment which would ban gay marriage in Iowa how would you vote?

Harkin: I would vote against it.

Henderson: So, what has changed for you from 1998 when you voted for the Defense of Marriage Act and today?

Harkin: Well, we all grow as we get older and we learn things and we become more sensitive to people and people's lives and the more I've looked at that I've grown to think differently about how people, how we should live and I guess I'm at the point of live and let live.