J.W. Lown, Mayor of San Angelo, Texas, resigned yesterday, after deciding that the relationship he had with a man from Mexico was more important to him than his job: 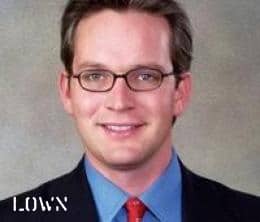 "Lown said in a telephone call late Wednesday afternoon from Mexicothat he has started a relationship with someone who does not have legalstatus in the United States. Lown said he did not want to take the oath of office knowing he was 'aiding and assisting' someone who was not a citizen. 'I made the final decision when I knew it was the right decision tomake for me and my partner and our future — and for the community,' hesaid. The mayor declined to identify the person. 'I don’t want to give his name,' Lown said. … Lown said the man came to the United States five years ago. Heattended Angelo State University. Lown said the relationship startedafter March. Lown and the man are in Mexico awaiting a visa to come back legally."

Lown was scheduled to be sworn in for his fourth term as the town's mayor (a job that pays $600 annually?) on Tuesday after a landslide election 10 days ago.

Lown's statement to the public, AFTER THE JUMP… 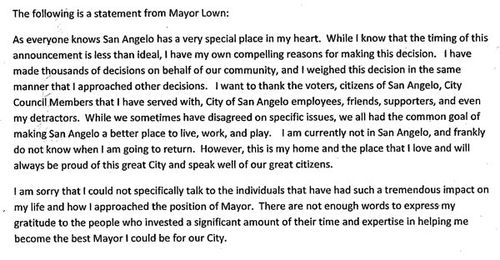