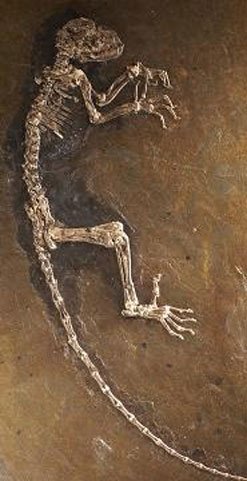 A small monkeylike fossil scientists are calling 'Darwinius masillae' is the elusive "missing link" in human evolution, scientists say. The fossil, discovered in 1983, had been split in half and sold to private collectors, but was recently brought back together by researchers led by Jørn Hurum, of
the University of Oslo Natural History Museum.

“This fossil will probably be pictures in all the textbooks for the next 100
years. This is the first link to all humans… truly a
fossil that links world heritage. This fossil is so complete. Everything’s there. It’s unheard of in the
primate record at all. You have to get to human burial to see something
that’s this complete.”

The Times reports: "Darwinius masillae, a small monkey-like creature that lived 47 million years
ago, illuminates a critical chapter in the human story when the primate
family tree split into two branches, one of which ultimately led to us. The fossil could even mark the point at which the evolutionary lineage that
gave rise to humans, apes and monkeys diverged from the one that produced
more distant primate cousins such as lemurs, lorises and bushbabies. Its anatomical features suggest it lies close to the origin of the human
branch and that the creature, or something rather like it, could be an
ancient ancestor of humans and their closest animal relatives"