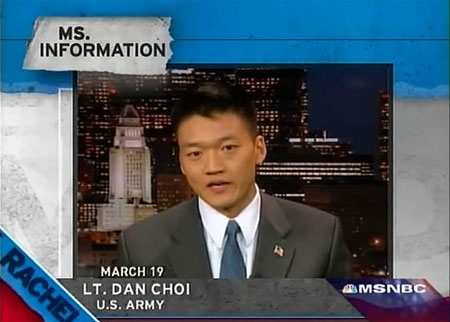 National Guard First Lieutenant Dan Choi of Knights Out, the group of 38 West Point graduates who came out of the closet in March to form a support group for US Military Academy active duty alumni, cadets, and their families, is being discharged from the Army for saying he is gay on Rachel Maddow's show.

On Maddow's show in March, Choi suggested that could be a consequence, and the military specifically mentioned the appearance in their letter to Choi, saying that it "constituted homosexual conduct."

Choi will be appearing on Maddow's show tonight.

Previous Post: « Obama Inaction on Promises to Gay Voters Under Focus
Next Post: Behind the Scenes of Lady GaGa’s ‘Lovegame’ Video »