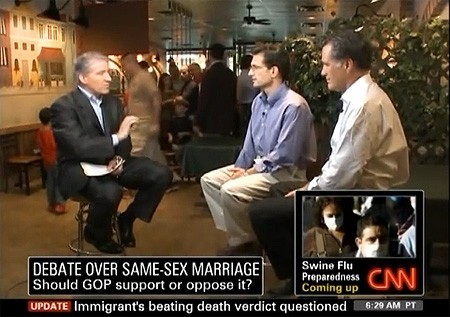 On John King's State of the Union today, Former Massachusetts Governor Mitt Romney and Congressman Eric Cantor demonstrated that they're still clinging to the religious right-wing base on marriage views, while the rest of the nation moves forward.

Clip and transcript, AFTER THE JUMP…

KING: Since the last election, a number of states have moved ahead withsame-sex marriage proposals. Some have done it legislatively. Some havedone it in other ways. Some has happened through the courts, which Iknow both of you think is the wrong way to do anything, whether it'ssame-sex marriage or anything else. But, if, at the end ofthis conversation, you come to the conclusion that the consensus of thepeople you're talking to is to agree what Steve Schmidt, John McCain'scampaign manager, said, you know, the Republicans are viewed asintolerant because we want constitutional amendments banning same-sexmarriage.  If, at the end of this conversation, you think theconsensus is, leave it to the states, which was Dick Cheney's position.That was Tom DeLay's positions, be federalist and let state-by-statemake these decisions. Are you both willing to support that?

ROMNEY: My view I've laid out before, which is you really can't havedifferent marriage provisions in different states and then expectpeople to be able to move around the nation and have different rightsin different states. Marriage is a matter of nationalconsequence. It's a — it's a status. It's not an activity. And as aresult, there should be a national standard. And my own view is thatmarriage is a relationship between a man and a woman.

KING:And so if five or 10 states go that way, do you need to have aconstitutional amendment, a national referendum? How do you deal withit?

CANTOR: I think Mitt has made the point that there arefederal implications; there are national implications to what one statedoes, in terms of the status of a married person in another state. I share Mitt's views. I believe in conditional marriage between a manand a woman. It's been that way thousands of years. And I believe thatmost of the American people, by far, apply or adhere to that principle.So I would continue to support the ability for us to say that's what amarriage means in America.