U.S. Supreme Court Justice David Souter, appointed by the elder George Bush in 1990, will retire at the end of June, according to officials close to Souter, news outlets reported late Thursday. 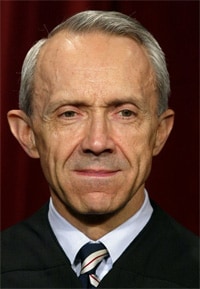 The NYT: "The departure will open the first seat for a Democratic president tofill in 15 years and could prove a test of Mr. Obama’s plans forreshaping the nation’s judiciary. Confirmation battles for the SupremeCourt in recent years have proved to be intensely partisan and divisivemoments in Washington, but Mr. Obama has more leeway than his predecessors because his party holds such a strong majority in the Senate. ReplacingJustice Souter with a liberal would not change the basic makeup of thecourt, where he and three other justices hold down the left wingagainst a conservative caucus of four justices. Justice AnthonyKennedy, a moderate Republican appointee, often provides the swing votethat controls important decisions."

Marc Ambinder at The Atlantic speculates: "Among those who might make the list of replacements: incoming solicitor general Elena Kagan, formerly the dean of the Harvard Law School, Cass Sunstein, a brilliant constitutional law prof who now works at Obama's Office of Management and Budget, Secretary of State Hillary Clinton, appelate judge Diane Wood, and Leah Ward Sears, the chief justice of Georgia's Supreme Court. A dark horse might be Judge Nicholas Garaufis of the Eastern District of New York. If Obama has a short list, it is probably much longer than mine, and includes many judges I haven't considered.A side note: watch for Vice President Joe Biden, a former chair of the Judiciary Committee in the Senate, to play a significant role in this process."

Speculation arose about an empty seat in February when Ruth Bader Ginsburg announced she had surgery for pancreatic cancer. Ginsburg, who is 76, has said she wants to serve into her 80's.