The New York Senate apparently convened today, then adjourned with only the Democratic side showing up, the NY Daily News' Elizabeth Benjamin reports: 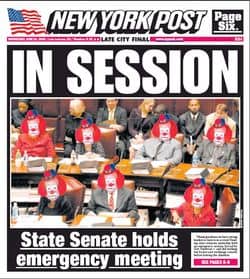 "Sen. Jeff Klein then stood and read into the record the Senate
Democrats' argument that any measures passed at the single-house
extraordinary sessions called by the governor are basically moot
because the other house isn't also present to pass same-as bills…And so, the Senate adjourned. Asked what happens now, Secretary of the Senate Angelo Aponte (still around and in control of the chamber, despite the Senate GOP's attempt to strip him of that power), replied: Now the governor's people are basically going to have to call both houses in, and when they do that, what we pass here will be legal.'"

More details of how it unraveled here.

The Democrats had apparently shown up at 6 am and locked themselves in the chamber.

Republican leaders have called for binding arbitration to end the stalemate, NY1 reports.

"State Senators need to know that it is unacceptable to leave Albany without voting on and passing the marriage bill. Marriage equality is not a partisan issue and should never be used as a political football in the current situation that has caused complete gridlock in the state capitol. Thousands of New York families expect and need Senators to immediately figure out a way to work together and start doing the people’s business. We expect that marriage will be at the top of the agenda when the stalemate is over and the Senate resumes its business, but only when we are certain that any such vote taken by the Senate is valid and not subject to legal challenge. The bill must be handled respectfully and given its due debate so that Senators can vote their conscience on this vitally important issue."