President Obama issued the following LGBT Pride Month proclamation late this afternoon on the occasion of the 40th anniversary of Stonewall:

***
BY THE PRESIDENT OF THE UNITED STATES OF AMERICA
A PROCLAMATION 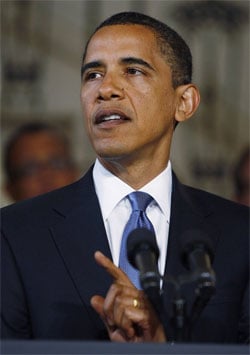 Forty years ago, patrons and supporters of the Stonewall
Inn in New York City resisted police harassment that had become
all too common for members of the lesbian, gay, bisexual, and
transgender (LGBT) community. Out of this resistance, the LGBT
rights movement in America was born. During LGBT Pride Month,
we commemorate the events of June 1969 and commit to achieving
equal justice under law for LGBT Americans.

LGBT Americans have made, and continue to make, great and
lasting contributions that continue to strengthen the fabric of
American society. There are many well-respected LGBT leaders in
all professional fields, including the arts and business
communities. LGBT Americans also mobilized the Nation to
respond to the domestic HIV/AIDS epidemic and have played a
vital role in broadening this country's response to the HIV
pandemic.

Due in no small part to the determination and dedication of
the LGBT rights movement, more LGBT Americans are living their
lives openly today than ever before. I am proud to be the first
President to appoint openly LGBT candidates to Senate-confirmed
positions in the first 100 days of an Administration. These
individuals embody the best qualities we seek in public
servants, and across my Administration — in both the
White House and the Federal agencies — openly LGBT employees
are doing their jobs with distinction and professionalism.

The LGBT rights movement has achieved great progress, but
there is more work to be done. LGBT youth should feel safe to
learn without the fear of harassment, and LGBT families and
seniors should be allowed to live their lives with dignity and
respect.

My Administration has partnered with the LGBT community
to advance a wide range of initiatives. At the international
level, I have joined efforts at the United Nations to
decriminalize homosexuality around the world. Here at home,
I continue to support measures to bring the full spectrum
of equal rights to LGBT Americans. These measures include
enhancing hate crimes laws, supporting civil unions and Federal
rights for LGBT couples, outlawing discrimination in the

workplace, ensuring adoption rights, and ending the existing
"Don't Ask, Don't Tell" policy in a way that strengthens our
Armed Forces and our national security. We must also commit
ourselves to fighting the HIV/AIDS epidemic by both reducing the
number of HIV infections and providing care and support services
to people living with HIV/AIDS across the United States.

These issues affect not only the LGBT community, but also
our entire Nation. As long as the promise of equality for all
remains unfulfilled, all Americans are affected. If we can work
together to advance the principles upon which our Nation was
founded, every American will benefit. During LGBT Pride Month,
I call upon the LGBT community, the Congress, and the American
people to work together to promote equal rights for all,
regardless of sexual orientation or gender identity.

NOW, THEREFORE, I, BARACK OBAMA, President of the
United States of America, by virtue of the authority vested in
me by the Constitution and laws of the United States, do hereby
proclaim June 2009 as Lesbian, Gay, Bisexual, and Transgender
Pride Month. I call upon the people of the United States to
turn back discrimination and prejudice everywhere it exists.

IN WITNESS WHEREOF, I have hereunto set my hand this
first day of June, in the year of our Lord two thousand nine,
and of the Independence of the United States of America the two hundred and thirty-third.

NOTE: Commenters point out that President Bill Clinton nominated San Francisco Board of Supervisors Member Roberta Achtenberg, to be Assistant Secretary for Fair Housing and Equal Opportunity in February 1993. Achtenberg won confirmation three months later in May after a vicious battle with the late Senator Jesse Helms, who called Achtenberg a "damn lesbian" and said "I'm not going to put a lesbian in a position like that. If you want to call me a bigot, fine."