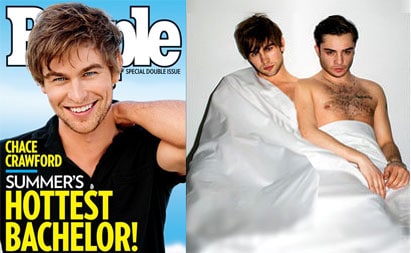 After People declares Chace Crawford the "summer's hottest bachelor," Crawford tells the magazine about the stereotypically straight activities he and Ed Westwick took part in when they found out about the gay rumors that were totally being made up about them:

"On the made-up gay rumors about him and co-star Ed Westwick: 'You know what we really did the first time we heard it? Ed goes, 'Oh, did you hear that rumor about us being gay?' I was like, 'Yeah, man.' He starts laughing and we're kind of like, 'Okay, you want to go play pool and have a beer?''"

Previous Post: « Barney Frank Calls DOMA Brief and Boycott of Fundraiser ‘a Mistake’
Will Introduce Fully-Inclusive ENDA Next Week
Next Post: Notes from Iran: Football, Photoshop, and a Plea to the World »