A fundraiser at the home of a lesbian couple in Encinitas, California for Francine Busby, a Democrat seeking the 50th Congressional District seat in 2010, was interrupted on Friday night over an apparent noise complaint: 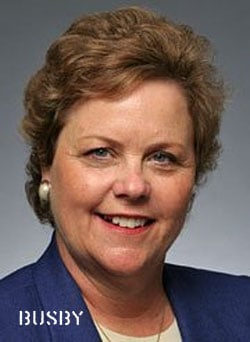 "It ended with Barman, 60, being arrested and jailed on suspicion of
battery on a peace officer, and resisting, delaying and obstructing a
peace officer. Pam Morgan, 62, a Rancho Santa Fe resident and one of the
guests, also was arrested and taken to the Encinitas Sheriff's Station,
where she was cited for resisting, delaying and obstructing a peace
officer. Other partygoers were doused with pepper spray, and seven
deputies, a sergeant and a helicopter were dispatched to the
neighborhood of expensive homes."

The incident is under review.

There were between 30 and 50 people at the fundraiser, and the only noise came from a megaphone Busby said she used for approximately half an hour. Neighbors said they slept through it.

However: "During Busby's speech, Barman said in a statement yesterday, a man
on the property behind her house shouted 'disparaging remarks' about
Busby and gay people. Barman lives in the house with her partner, Jane
Stratton, 55. After her talk, Busby said, people chatted. 'It was a quiet home reception, disrupted by a vulgar person shouting obscenities from behind the bushes,' Busby said."

But it was Deputy Marshall Abbott who attacked guests once he responded:

"When Abbott arrived, [Sgt. Thomas] Yancey said, he told Barman about the
complaint, and she uttered an expletive about a neighbor. Abbott asked
Barman for her birth date so he could issue a noise warning, but Barman
refused to give it, he said. Barman tried to walk away, Yancey said, and Abbott grabbed
her. The guests took Barman away, and Abbott used pepper spray on them.
In the chaos, someone kicked the emergency response team member, a
woman who is 5-foot-2, Yancey said. 'He was pepper-spraying the faces of anyone who tried to
talk to him,' Busby said. 'People were stunned. It was something that
none of us has experienced.' In her statement, Barman said she asked the deputy why he needed her birth date, because he knew her name and where she lived. 'He told me I was under arrest, grabbed my right arm, twisted it behind me and threw me on the ground,' she said."

Apparently the use of tasers was threatened as well.

Busby said she will demand an investigation.