Actress Farrah Fawcett has died after a three-year battle with cancer: 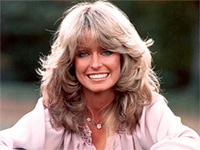 "Fawcett, 62, died at St. John's Medical Center in Santa Monica at 9:28 a.m.
Thursday morning with her longtime love, Ryan O'Neal and her friend
Alana Stewart by her side. O'Neal told reporters waiting outside the
hospital this morning only that 'she's gone.'"

O'Neal to People: "She's gone. She now belongs to the ages. She's now with her mother and sister and her God. I loved her with all
my heart. I will miss her so very, very much. She was in and out of
consciousness. I talked to her all through the night. I told her how
very much I loved her. She's in a better place now…She was with her team when she passed … Her eyes were open, but she
didn't say anything. But you could see in her eyes that she recognized
us."