Ben Smith at Politico reports that Howard Dean has pulled out of the LGBT Democratic Party Fundraiser scheduled for tomorrow night in Washington D.C., which will be met with protest. 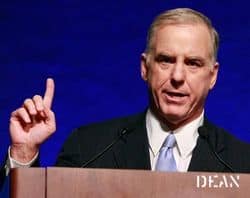 "A Dean spokeswoman, Karen Finney, stressed that Dean's move was a scheduling conflict due to a 'family commitment.'"

Could it be that we are family?

Via Americablog – which notes that Dean was one of the top four names on the invite. Americablog also has a rundown of who's in and who's out.

The Victory Fund's Chuck Wolfe has dropped out as well. As has Hilary Rosen.

Rep. Jared Polis is attending the fundraiser. He talked to The Advocate about why he's doing so:

"I’m a Democrat and a proud Democrat. Our
party’s not perfect but certainly I will help
the Democrats however I can. I did an event for
Democrats for education reform Monday and if you figure our
party has a ways to go on LGBT equality, we have even
further to go on education reform where President
Obama has been a great leader, but those are battles
we fight every day … Some donors might
choose to support the Party now, some might delay. I
would certainly hope that before the next election
we’ve demonstrated that we’ve moved
substantially on the equality agenda. But if the Democrats
fail to deliver on the equality agenda, then
it’s reasonable that gay and lesbian donors
might choose to donate to activist groups rather than the
Party itself.