A gay couple in Mesa, Arizona are involved in a dispute with the Cambria Ocotillo Home Owners Association over their rainbow flag: 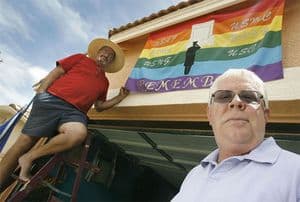 "The Vanderrans, who are gay, argue that their request to fly the gay pride flag was approved in 2003 by a previous management company. They took the flag down in August 2008 after receiving a complaint from the association. They still display several holiday-themed gay pride flags.
A letter to the couple from Olcott said the association’s design guidelines permit holiday flags. 'The board interprets the term ’holiday’ as the recognized national holidays. Those are New Year’s Day, Martin Luther King Day, Easter, Memorial Day, July 4, Veteran’s Day, Labor Day, Thanksgiving Day and Christmas Day,' the letter said. 'A day celebrating Gay Pride is not yet a nationally recognized holiday.'
Steven Vanderran said that argument doesn’t jibe, pointing out that Easter isn’t a nationally recognized holiday either, even though the board permits Easter decor.
…The couple says it has been the subject of slurs and mockery since the dispute began. In a May 11 posting on a local blog, a writer said the decorations were offensive and 'If they want to flaunt their preferences in sex partners like that, they need to move into a gay community.'
Olcott said the association’s intention is only to prevent clutter and it’s not singling the couple out."

Previous Post: « Anderson Cooper Talks to Dan Choi on ‘DADT’ SCOTUS Decision
Next Post: Boy George Makes Out with a (Gasp) Member of the Opposite Sex »