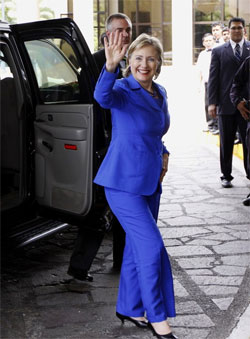 "Forty years ago this month, the gay rights movement began with the
Stonewall riots in New York City, as gays and lesbians demanded an end
to the persecution they had long endured. Now, after decades of hard
work, the fight has grown into a global movement to achieve a world in
which all people live free from violence and fear, regardless of their
sexual orientation or gender identity.

"In honor of Gay and
Lesbian Pride Month and on behalf of the State Department, I extend our
appreciation to the global LGBT community for its courage and
determination during the past 40 years, and I offer our support for the
significant work that still lies ahead.

"At the State
Department and throughout the Administration, we are grateful for our
lesbian, gay, bisexual and transgender employees in Washington and
around the world. They and their families make many sacrifices to serve
our nation. Their contributions are vital to our efforts to establish
stability, prosperity and peace worldwide.

"Human rights are
at the heart of those efforts. Gays and lesbians in many parts of the
world live under constant threat of arrest, violence, even torture. The
persecution of gays and lesbians is a violation of human rights and an
affront to human decency, and it must end. As Secretary of State, I
will advance a comprehensive human rights agenda that includes the
elimination of violence and discrimination against people based on
sexual orientation or gender identity.

"Though the road to
full equality for LGBT Americans is long, the example set by those
fighting for equal rights in the United States gives hope to men and
women around the world who yearn for a better future for themselves and
their loved ones.

"This June, let us recommit ourselves to
achieving a world in which all people can live in safety and freedom,
no matter who they are or whom they love."

It will be interesting to see what, if any, statement Obama releases this month considering that most of his campaign promises to LGBT citizens remain unfulfilled.