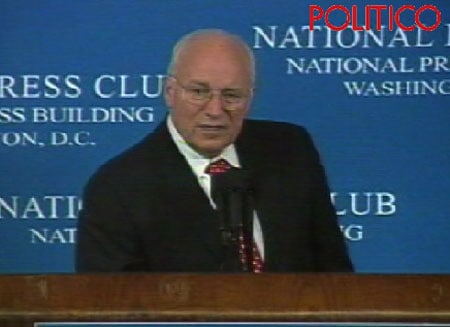 Said Cheney: "Freedom means freedom for everyone. Many of you know one of my daughters is gay – something we've lived with for a long time in our family. I think people ought to be free to enter into any kind of union they wish, any kind of arrangement they wish. The question of whether or not there should be a federal statue that governs this, I don't support. I do believe that historically the way marriage has been regulated is at the state level. This has always been a state issue. And I think that's the way it ought to be handled today, on a state-by-state basis. Different states that make different decisions. I don't have any problem with that. I think people ought to get a shot at that, and they do at present."

On another note, is this the first time that Cheney has discussed his daughter's sexuality voluntarily? Historically he's been surly and offended when the subject has been brought up. You may remember a January 2007 interview in which Wolf Blitzer asked Cheney about his daughter's child, and Cheney replied, "frankly, you're out of line with that question."