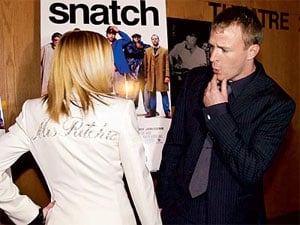 "I really disliked Guy Ritchie. He is miserable. Always is, always has been and I can see why she is not with him anymore. I don't know why he is… I just think he is naturally miserable. I also think he was very threatened by my relationship with my sister. None of the other men in her life have ever felt that way. I honestly have never experienced anybody so insecure. She had to wear a jacket with his name on it for God's sake, it just never made any sense to me.

"I had to be black-mailed into going to the wedding. I had done an interior design job for Madonna and she said she would only pay me if I went to the wedding. I had to go because I wanted to get paid but it really was a horrible experience. She asked me to give a toast at the reception and I said to her 'You really don't want me to this because I'm in a bad mood.' But she insisted. So I got up and said, I would like to toast this happy moment. It happens only twice in a person's life- which was a dig at her first marriage. And I said 'If anyone wants to f*** Guy, he will be in my room.' I knew he would be angry about that because he is a homophobe. I probably ruined his wedding day but I just didn't care what he thought."