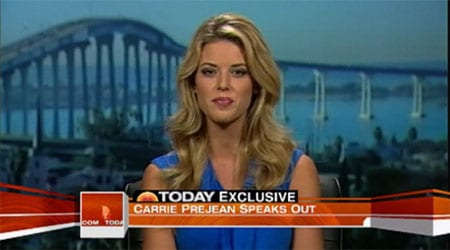 Carrie Prejean told Matt LAuer on the Today show this morning that she was fired over her comment opposing gay marriage and not over missed appearances or her conduct following a press conference in May where Donald Trump announced she was keeping her crown.

However, yesterday, a set of emails between Miss California director Keith Lewis leaked. Here are some of Prejean's emails:

Youdo not cooperate with me, and you pick and chose the the things YOUwant me to do. That is not happening anymore. Stop speaking for me. Ihave MY own voice. What are u gonna do fire me for volunteering for thespecial olympics hahaha ur crazy No I am doing this appearance. You donot need details. Its for the SPECIAL OLYMPICS!!! You just need to knowI will be doing it alright

You will not facilitate this appearance

Iexpect you to be forwarding me ALL email requests and interviewrequests to me. I know how you are and its not right if you areselecting things for me. Thanks for your cooperation And fyi I am apresenter of medals at the special olympics in a few weeks for thesummer games. So now u know I am doing this and I expect your fullsupport. Also I was asked to fill in for a dj on a local radio show.. Ill be reading from a show biz script monday. I am doing this

Justas you need details for things so do I. Also nice move trying to makemoney off of my appearances Also.. Do not try and silence me by sayingI do not have a comment about the prop 8 ruling. Maybe you don't. I do

Watch the Matt Lauer Today show interview, AFTER THE JUMP…