This is not the recently-announced Olson-Boies case, but an earlier case brought by a couple married in California arguing their marriage should be recognized in other states: 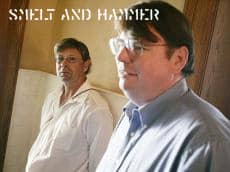 "The motion, filed late Thursday, argued the case of Arthur Smelt and
Christopher Hammer does not address the right of gay couples to marry
but rather questions whether their marriage must be recognized
nationwide by states that have not approved gay marriage. 'This case does not call upon the Court to pass judgment … on the
legal or moral right of same-sex couples, such as plaintiffs here, to
be married,' the motion states. 'Plaintiffs are married, and their
challenge to the federal Defense of Marriage Act ('DOMA') poses a
different set of questions.'…The government said Smelt and Hammer seek a ruling on 'whether by
virtue of their marital status they are constitutionally entitled to
acknowledgment of their union by states that do not recognize same-sex
marriage, and whether they are similarly entitled to certain federal
benefits. Under the law binding on this Court, the answer to these questions must be no,' the motion states."

Americablog checks out the briefs:

"The constitutional propriety of Congress's decision to decline to extend federal benefits immediately to newly recognized types of marriages is bolstered by Congress's articulated interest in preserving the scarce resources of both the federal and State governments. DOMA ensures that evolving understandings of the institution of marriage at the State level do not place greater financial and administrative obligations on federal and state benefits programs. Preserving scarce government resources — and deciding to extend benefits incrementally — are well-recognized legitimate interests under rational-basis review. See Butler, 144 F.3d at 625 ("There is nothing irrational about Congress's stated goal of conserving social security resources, and Congress can incrementally pursue that goal."); Hassan v. Wright, 45 F.3d 1063, 1069 (7th Cir. 1995) ("[P]rotecting the fisc provides a rational basis for Congress' line drawing in this instance."). Congress expressly relied on these interests in enacting DOMA: Government currently provides an array of material and other benefits to married couples in an effort to promote, protect, and prefer the institution of marriage. . . . If [a State] were to permit homosexuals to marry, these marital benefits would, absent some legislative response, presumably have to be made available to homosexual couples and surviving spouses of homosexual marriages on the same terms as they are now available to opposite-sex married couples and spouses. To deny federal recognition to same-sex marriages will thus preserve scarce government resources, surely a legitimate government purpose."