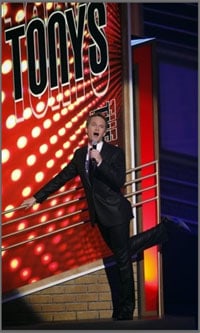 Clips after the jump of Poison frontman Bret Michaels' near-beheading, as well as Neil Patrick Harris' excellent closing number, and the show's opening number, which Harris called the most expensive (and perhaps gayest) number the Tonys has ever produced and featured Liza Minnelli, Dolly Parton, and Elton John.

Bret Michaels' near-decapitation (happens about :08 seconds into the clip below) as the set piece comes down.