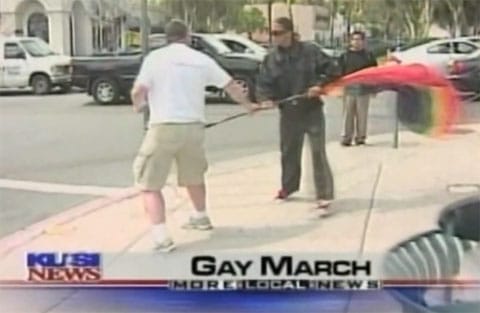 Rex Wocker reports that the Executive Director of San Diego LGBT Pride, Ron DeHarte, was attacked and beaten in the town of Lemon Grove during an 'Equality Torch Relay' which made its way around 18 incorporated towns and cities in San Diego County and finished in downtown San Diego. 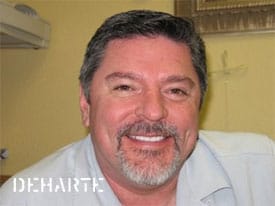 Wockner writes: "In an interview the following day, deHarte said: "I was waiting for theEquality Torch Relay to come by Main and Broadway and standing in frontof the famous overly life-size lemon (statue), and with a rainbow flagbig as day … and someone decided to remove me from Lemon Grove. He started whaling on me and tried to take the flag away and made itvery clear he didn't think I should be there: 'Get out of here. What doyou think you're doing? You need to get the fuck out of here. Get thatout of here. There's no place for you here.' All the while, he was grabbing at the rainbow flag and trying to takeit away from me. And he was kicking me and slapping. He hit me good acouple of times. … I got the side of his fist the first time he hitme, then I think he got my lower jaw on another time. He kicked me afew times. I wasn't bleeding or anything. It certainly hurt. Icertainly had soreness as the day went on, and this morning when I wokeup, I realized my upper lip was swollen and the inside of my cheek wascut up." (deHarte photo by rex wockner)

The attack ended when the assailant realized he was on video.

The San Diego Union Tribune reports: "In a twist on protesting, organizers mobilized about 140 residentsin far-flung corners of the county to walk their own streets carrying a 'torch' as a symbol of the cause. The torch's flames were actuallypieces of shaped metal. An attack on the event organizer in Lemon Grove, whichresulted in the arrest of an Oceanside man, was the only interruptionof what was a relatively peaceful event."

Video of the last moments of the attack, AFTER THE JUMP…