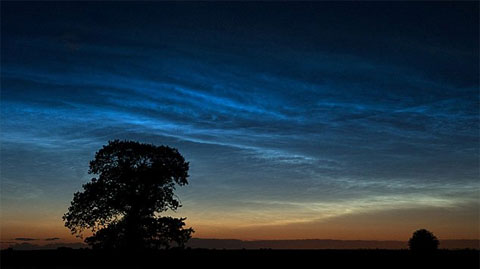 Stunning and rare polar weather phenomenon makes an appearance in Britain in June:

"…stunned residents spotted a rare glimpse of the clouds lighting up Leicester's skyline shortly after midnight on Thursday morning.

Noctilucent cloud formations are the highest on Earth where temperatures can plunge below -130C (-200F) and winds peak at 300mph.

They appear in the mesosphere, which is between 30miles and 50miles above the Earth's surface…Despite the beauty of the clouds, scientists fear the clouds could be a sign of changes in the upper atmosphere because of global warming.

'The clouds are becoming brighter, occurring more frequently with time and they are being observed at lower latitudes than ever before,' an AIM mission expert said."