Ben Smith at Politico reports that the National Organization for Marriage is promising to oppose New York GOP senators who vote for marriage equality in their re-election campaigns to the tune of $500K: 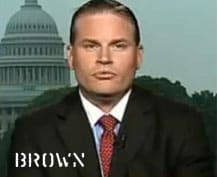 "'Gay marriage is not high on the list of any voters' priorities, but
again and again we've seen politicians respond to political money
thrown around by Tim Gill and his friends and ignore the wishes of
their own constituents,' said Brian Brown, executive director of the
anti-same-sex-marriage organization, who said the group is forming a
subsidiary, NOM PAC New York, for the purpose. 'The first half million dollars will be used in GOP primaries,' noted
Brown, "but we are also looking to aid Democratic candidates who want
to buck the establishment on the marriage issue, and to help in general
election contests.'"