On today's The 700 Club, Pat Robertson was asked what to do if your son tells you he's gay: 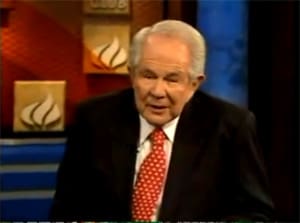 "I am not at all persuaded that so-called homosexuals arehomosexuals because of biological problems. There may be a very few, but there are so many that have been madehomosexuals because of a coach or a guidance counselor or some other malefigure who has abused them and they think there's something wrong withtheir sexuality. So you need to get deep into why he is what he is, instead of just saying, 'Well, he's a homosexual sohow do I handle him, andhow do I be Christian?' Well,I think you ought to tell him, 'Listen, son, you know, here'swhat the Bible says about this,and it's called an abomination before God, so I've got to tell you the truthbecause I love you'…I mean, if somebody's on their wayto hell, they'll — I mean,you've got to love them to rescue them."

Dan Savage says it's not an insult to gays, it's an insult to Christians: "If you buy into Robertson's theories on origins of homosexuality then you have to embrace a highly unflattering picture of Christian America. If Pat is right then all those fundamentalist Christian churches, schools, counseling programs, and summer camps—the whole parallel Christian universe—are teaming with sexual predators."