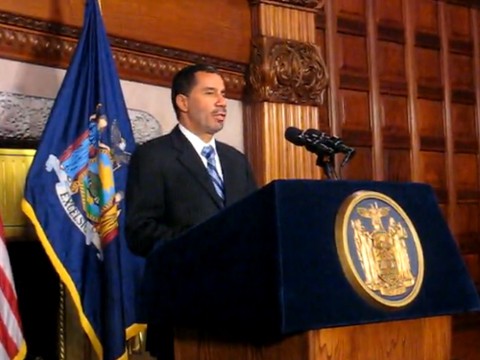 Said Paterson: "We will call the Senate into session every day until the people'sbusiness is discharged and deliberations are held on a number ofimportant issues, we will be moving on to issues of reform, fiscaldiscipline and also civil rights."

He also said: "Interesting ideas or controversial pieces of legislation have alwayscome to Albany to die. We are changing the culture here. We are goingto give a hearing to those issues that the people want the Senate todeliberate on. The Senate will go back to work tomorrow. The people'sbusiness will resume at 3 o'clock."

WCBS reports: "While the governor can't force senators to vote on or debatebills, the New York Constitution grants him the power to call a speciallegislative session – and experts say he can even keep the senators inthe state house with the help of state police."

Marriage equality is not expected to come up on the agenda today. But it is likely this week. CALL YOUR STATE SENATOR if you have not already. Information HERE.

Previous Post: « Ed McMahon Dies at 86
Next Post: Ricky Martin: I Have Never Talked About Who My Heart Belongs To »