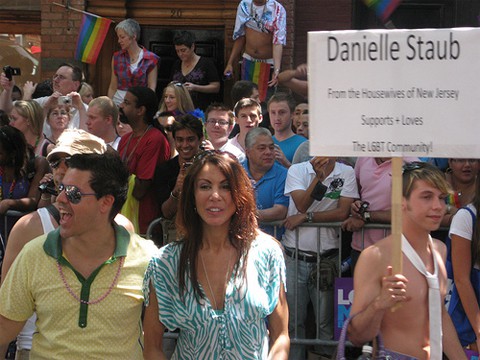 Danielle Staub of the Real Housewives of New Jersey, marched in yesterday's Pride parade in NYC. Image by Flickr user SReed99342. You may remember Staub defended gays from homophobic slurs by her co-stars on the recent series.

WaPo: "The annual march down Fifth Avenue commemorated the Stonewall rebellionof 40 years ago, when patrons at a gay bar resisted the police. Theseveral days of disturbances that followed the uprising became one ofthe defining moments of the gay rights movement. The celebration was tempered by the knowledge that other states,including Massachusetts, Connecticut and Iowa, have legalized same-sexmarriage before New York."
Boy Culture has a wrap-up of the NYC Pride parade as does Kenneth in the 212.

Here's an excellent portfolio of shots from Boss Tweed on Flickr.

A contingent of gay bloggers also marched this year ( I was invited but out-of-town, so unfortunately couldn't join, but it looks like they had fun).

CNN's coverage of the event, AFTER THE JUMP…

Previous Post: « Elton John, As Always, Embracing the Next Wave
Next Post: Bernie Madoff Sentenced to 150 Years in Prison for Ponzi Scheme »