Yesterday, the NYT looked at how marriage equality has been "lost in the shuffle of a divided senate.": 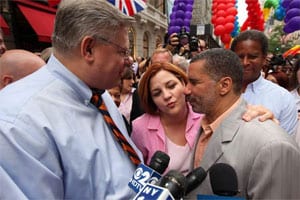 "Mr. Paterson (pictured, right, with senator Tom Duane and NY City Council speaker Christine Quinn) said on Sunday that while he hoped the Senate would move quickly to pass a same-sex marriage bill, he remained wary of introducing the issue into such a fractious political environment. 'I think that the bill should be considered,' he said, adding, 'I have tried not to insert into an already acrimonious situation any controversial legislation that might exacerbate the tension and cause the bill to lose.'It remains unknowable what will become of the bill, which passed the State Assembly in May by a margin of 89 to 52. After Mr. Paterson initially omitted the bill from the agenda of the first extraordinary session of the Senate that he convened last week, he drew a sharp outcry from advocates of gay rights. The governor then included it among the bills he asked the Senate to consider later in the week." 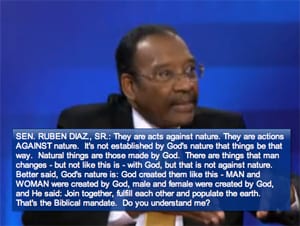 Andrés Duque at Blabbeando translated a lengthy Spanish-language interview with homophobic New York state senator Ruben Diaz, Sr. from earlier this month, and analyzed it thoroughly on his site. In the interview, Diaz Sr. acknowleges the news that emerged last week that he has two gay brothers, says senator Tom Duane is lying that he has the votes to pass the bill, admits marriage equality does not affect his own life, equates homosexuality with bestiality, defends his opposition to the Gay Games in 1994 and public funding for the Harvey Milk school, and blames NYC mayor Michael Bloomberg for marriage equality's difficulties in the state.

Watch the interview with Duque's translation, AFTER THE JUMP…