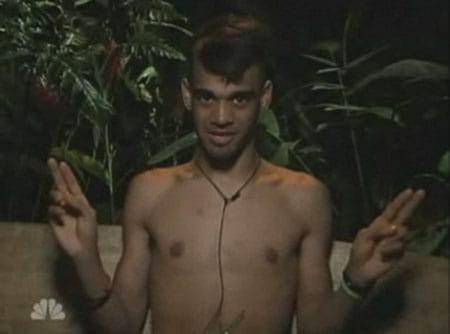 Here's an example of the kinds of things that spew forth when a bunch of "celebrities" accept money to sit around in a jungle for days on end. Earlier this week on I'm a Celebrity Get Me Out of Here, a discussion began when former American Idol contestant Sanjaya Malakar submitted to Janice Dickinson's request that he put on eyeliner.

Here's the confession that resulted:

"Like, yeah, a lot of people want me to be their gay best friend, and Imake a really good gay best friend. But I don't like guys, so itconfuses people…I do hair, and I'll sit in the corner and knit. So it confuses people. A lot of my friends refer to me as their 'straight gay best friend'because we'll go do things that stereotypically you would do with a gayguy…I'm not, like, that classic, stereotypical macho guy that's just, like,'Oh yeah! Oh, she's hot. I wanna get in her pants! I'm notthat kind of guy. I was raised by women, so I kind of have a connectionwith my feminine side, but I'm attracted to women. So, it's like peoplelike to kind of throw that at me, like, 'Oh, you must be gay.' But I'mlike, 'Whatever, gay people are awesome.'"