Prior to the start of the Los Angeles Pride parade which happened this weekend, San Francisco Mayor Gavin Newsom and L.A. Mayor Antonio Villaraigosa both expressed concern over the disturbing Department of Justice brief filed last week in defense of DOMA. 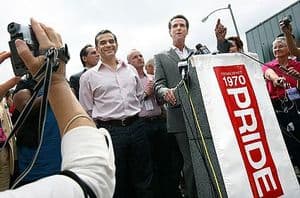 Said Villaraigosa: "I'm concerned about some of the arguments being made by the Justice Department."

Added Newsom: "I think it's a big mistake."

The L.A. Times reports: "Newsom and Villaraigosa, potential rivals in next year's Democratic
primary for governor, were both careful to avoid direct criticism of
President Obama, who pledged during his campaign for the White House to
repeal the marriage law."