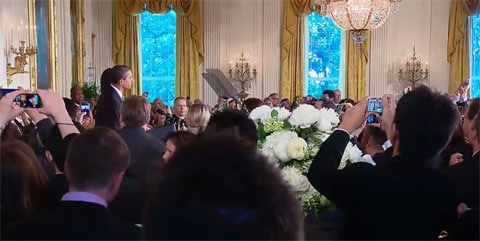 Here is full video of Obama's remarks to those assembled in the White House East Room yesterday for a reception marking Pride month. This is a follow-up to yesterday's post, where you can see the transcript and guest list to the event.

Here is a round-up of reaction and reports on the event:

Wall Street Journal: "The president gave no new details about how he would advance theseissues, but he made passionate remarks saluting the pioneers of thegay-rights movement and expressed solidarity with those working forequal rights."

NYT: "Joined by his wife, Michelle, the president directly addressedcriticism from gay and lesbian leaders that he had not been a forcefuladvocate for them."

AP: "But the president says his administration already has made progress onseveral fronts and that activists will — in his words — 'have prettygood feelings' about the Obama administration when he leaves office."

CNN: "But critics say it's too little, too late."

Washington Post: "But the excitement among the several hundred guests invited by thefirst couple to the East Wing Monday was tempered by frustration amongmany who believe that the president has moved too slowly to make goodon his campaign promises."

Guest Tom Gregory: "The Obama Administration assembled a group of two hundred or more ofAmerica's well-heeled leaders for equality, but like little doggiesmost were wide-eyed at his feet. Today's address left me wanting. The pain experienced by homosexualsis deadly tragic. Annually, thousands of American children killthemselves due to the bigotry pervasive across America. In today's speech President Obama said gay America would be happy bythe time his administration is over. If he doesn't stop offeringexcuses and empty promises, they will be."

Guest Joan Garry:  "No president had ever invited a big bunch of us over for cocktailsduring Pride Month before. The event was remarkable. Historic. I wasproud to be there. Proud to have my partner at my side…And of course I wanted more."

HRC: "President Obama's remarks today were welcomed and appreciated and,as he stated, it is the actions to advance equality — not simply thewords — that will be the true marker by which this White House will bejudged.  On the eve of this weekend’s 40th anniversary of Stonewall, thepresident has yet again reiterated his support for most of the criticalfederal issues facing millions of LGBT Americans.  We must continue thehard work of turning that support into the passage of actual laws.  Welook forward to working with President Obama and his administration toadvance equality, and we pledge to be good-faith partners throughoutthe many battles that lie ahead of us."

Log Cabin Republican spokesperson, Charles T. Moran "It is pretty entertaining to watch the President throw himself a 'Pride Party' after taking a pass on acting upon several issues that would have fulfilled his promises to our Community. I'm not quite sure what he's actually proud of. Hollow words and false promises do not define a legacy or an Administration – only actions and follow-through. This Administration has had several opportunities to show its commitment to the LGBT community and make life better for millions of Americans. Hosting this 'sideshow' reception only rubs salt in the wounds of so many that actually believed his message of 'hope & change.'"

GLAAD President Jarrett Barrios: It was an honor to take part in this important event for the gay andtransgender community with fellow advocates and my 17-year old son…Our community will continue to advocate and will be watching closely toensure Obama makes good on the promises he discussed today and duringthe campaign. At the heart of the issues discussed today are everydayAmericans who want the same chance as everyone else to earn a living,be safe in their communities, serve their country, and take care of theones they love."

Americablog: "The President gave his speech to the big gay A-listers at the WhiteHouse (well, minus those who were blacklisted). Boy, that crowd wasreally into it. They clapped wildly when he said the words, 'gay,lesbian, bisexual and transgender.' Just because he said the words.Even though Bill Clinton said those words – what? – 17 years ago? Also,your president wants you to know that unjust laws must be overturned.Some day. The crowd loved that one too. One might forget that the Obamaadministration defended the Defense of Marriage Act law recently. Theynot only defended it, they defended it in a way that demeaned andmocked same-sex marriages by invoking incest and pedophilia. But nevermind."

Americablog also notes that the guest make-up was 64% men, 36% women.

Guest Rick Rosendall: "I spied Frank Kameny (whose guest I was at the event) sitting on anupholstered bench at the foot of the main staircase, and sat down nextto him. I told him of a conversation I had just had: 'So I said, 'Willyou support the Uniting American Families Act — Jerry Nadler's bill?'He said, 'I haven't read it yet.' I said, 'Please take a look at it,'to which he said, 'I will.'' Frank asked, 'Who said this to you?' I replied, 'The President of the United States.' Now I realize that getting the President to tell you that he'lllook at a bill is not the most earth-shaking development, but if JohnAravosis thinks I am going to pass up a chance to get a few moments ofinput to the most powerful man in the world, he can kiss myyou-know-what."

Watch the full video of Obama's remarks, AFTER THE JUMP…