A cowardly gang of five brutally beat a teen in an anti-gay attack in Bridgwater, UK: 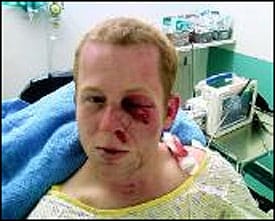 "Jason Saunders, aged 18, was left with a broken nose and bruising
after being jumped on by a five-strong gang after they started shouting
abuse at him as he walked to work from the Sydenham area of Bridgwater
with his partner, Gary Holman. The attack happened June 23, at around
6.40pm. Turning
on to College Way, he walked past a group of five people. The group
started shouting abuse at him, calling him 'queer' and 'ginger',
telling him to 'sort out his hair colour'. Jason said: 'I asked them why they were shouting abuse at me and the next thing I know, all five people were attacking me. They were kicking and punching me in the face and still calling me names.' After the attack, Jason was
rushed to Bridgwater Hospital, before being taken to Musgrove Park
Hospital in Taunton as doctors were worried about him drifting in and
out of consciousness. He
has been left traumatised and in fear of his safety. Left with a broken
nose and bruising, he has become totally reliant on other people."

According to police, one 29-year-old man was arrested and released on bail pending further investigation.