Dr. Joel Weisman, one of the first physicians to detect AIDS, died Saturday from complications due to heart disease according to Bill Hutton, his partner of 17 years, the L.A. Times reports: 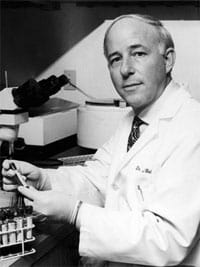 "Weisman was a general practitioner in Sherman Oaks in 1980 when he
noticed a troubling pattern: He had three seriously ill patients with
the same constellation of symptoms, including mysterious fevers,
rashes, drastic weight loss and swollen lymph nodes. All were gay men
whose problems seemed to stem from defects in their immune systems. The physician wound up referring two of the patients to UCLA
immunologist Martin S. Gottlieb, who had a gay male patient with a
similarly strange array of afflictions. Recognizing that these were not
isolated cases, Weisman and Gottlieb wrote a report that appeared in
the June 5, 1981, issue of the Centers for Disease Control's Morbidity
and Mortality Weekly Report. That report signaled the official start of
the epidemic that the federal agency later named acquired
immunodeficiency syndrome."

Weisman went on to become a national advocate for the battle against the disease, AIDS Project Los Angeles reports in a statement. Elizabeth Taylor said of Weisman: "He is pre-eminent in the development of treatments which have
dramatically improved the quality of lives for people with AIDS… [and]
among the first to lead the nation in caring for those in need. His
compassion and sensitivity are incomparable."