A silver medallist in the 1992 Barcelona Olympic games, gay Canadian boxer Mark Leduc was found dead in a Toronto hotel sauna on Sunday, The Star reports: 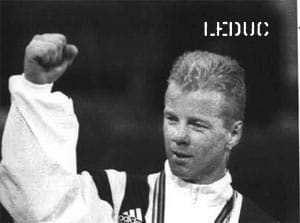 "The former light welterweight boxer was expected to fail because he
wasn't recognized like other "star" contenders were, said Leduc's
brother-in-law, Mark Johnson. 'They thought he would be the worst (on
the Canadian team), but he knew how to hit people and not get hit.' And blocking the hits was what the Canadian boxer would continue to do throughout his 47 years. Leduc
died at St. Michael's Hospital Wednesday night after he was found
unconscious in a local hotel sauna early Sunday morning, Johnson said,
adding doctors believe Leduc suffered a heat stroke that damaged his
internal organs. 'We were shattered, disoriented, almost in
disbelief. We just kept waiting for a miracle to happen,' said Johnson,
who had attended Leslie Street Public School with Leduc. 'He's much too
young.' … The Toronto native went pro shortly after his Olympic success and
retired after winning the Canadian super lightweight championship
in1993. Around that time, Leduc also came out of the closet and
was an active advocate for the gay community, speaking out in
gay-rights documentaries such as 1994's For the Love of the Game and
volunteering for the Toronto People with AIDS Foundation."