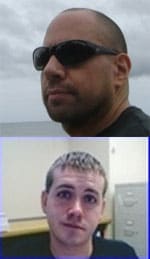 A mass gay kiss-in is planned for August 15 in cities around the nation in response to the treatment of a couple who were arrested for kissing on a plaza near Salt Lake City's Mormon Temple:

"A pair of bloggers, David Badash, of New York, and David Mailloux, of Boston, are behind the plans. They say the events are not a protest against those who oppose gay rights. But they say people should be allowed to freely express their affection."

Also, their first promotional video, AFTER THE JUMP…