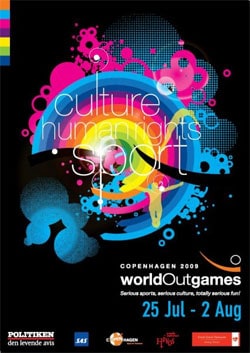 Three foreign men were the target of a homophobic attack on Friday night at the opening of the World Outgames in Copenhagen:

"Two men, aged 28 and 33, were taken into custody after witnesses say
they heard them yell ‘homo pig’ at the three, and attacked them as they
returned from the opening ceremony of the World Outgames on Town Hall
Square.
The three, who come from England, Sweden and Norway and are attending
the nine-day event, were treated at hospital for injuries but have
since been released. The two suspects will be remanded in custody for the remainder of the nine day World Outgames event. Henrik
Vedel of the Copenhagen Police said the two attackers, who both have
criminal records, are believed to have been under the influence of
alcohol and drugs at the time. The suspects said they could remember
nothing about the incident…Uffe Elbæk, director of the Copenhagen World Outgames, praised the police for an ‘exemplary’ response. He
called the attack an isolated incident, but said it was ‘an example of
what homosexuals around the world risk if they are exposed, and it
shows why an event such as World Outgames is necessary’."