Choreographer Merce Cunningham died peacefully in his home in New York on Sunday, according to his foundation, the L.A. Times reports: 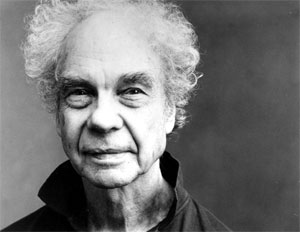 "Cunningham challenged nearly every assumption about how dances are madeand perceived. '"Dancing is a spiritual exercise in physical form,' hewrote in 1952. Evolving over the years from a fluid and even balleticmodern dance style to a technique emphasizing sudden, virtuosic changesof direction, balance and body-focus, Cunningham refused to interpretmusic, tell stories, depict characters or even to accept the idea ofthe choreographer as a kind of all-knowing god. Instead, he used chance (throwing dice, flipping a coin) to help himdiscover possibilities beyond his imagination, insisting that thechoreography, score, scenic design and costumes for a work should becreated independently and come together only at the final rehearsals orfirst performance. 'Cunningham is happiest when he can create a situation in whichno one knows what to expect,' Times music critic Mark Swed wrote in2003, 'not his audience, not his dancers or collaborators, not leasthimself.' 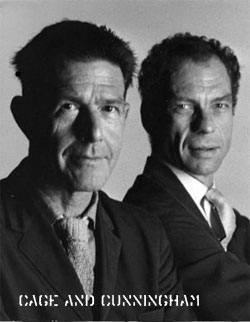 Cunningham had a long partnership with composer John Cage, who died in 1992:

"Like his father, his brothers became lawyers, but Cunningham studiedacting in the Cornish School of Fine Arts in Seattle, soon switchinghis major from theater to dance. There he met composer John Cage, whowas soon to be his lifelong personal and professional partner…In 1944, Cunningham and Cage gave their first joint concert in New York(six solos to Cage's music), and the following year he left Graham tofreelance. Cunningham formed his own company in 1953, allying himselfwith leading members of the American avant-garde: painters Andy Warhol,Frank Stella and Jasper Johns, among others. Robert Rauschenberg becamehis first resident designer, and Cage served as music director…The relationship with Cage deepened into what people who knew them callone of the great (if sometimes turbulent) love stories of the age –one inseparable from the couple's revolutionary achievements asartists. 'They amazed me by their air of living for art and freedom,'critic Alfred Kazin wrote of them. But it wasn't a time when anyone, anywhere celebrated what amounted toa gay marriage, and, what's more, the personal style cultivated by Cageand Cunningham left their story largely untold. 'I don't think I wasguarded about my personal life,' Cunningham said to the Guardian in2000. 'John and I were together. We did our work together. We traveledtogether. What more is there to say?'"

One of Cage and Cunningham's mixed media collaborations and another Cunningham piece called "Beach Birds", AFTER THE JUMP…