Congressman Jerry Nadler plans to introduce legislation to repeal DOMA this week or once Congress returns from August recess, according to the Bay Area Reporter, but the legislation will not concern civil unions or domestic partnerships: 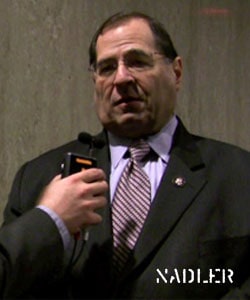 "Under DOMA's Section 3 the federal government is forbidden
from recognizing LGBT couples married in the six states where same-sex marriage
is legal. Section 2 of the law says those states that outlaw same-sex marriages
do not have to recognize legal same-sex marriages from other states. Nadler
said his bill would repeal both sections of DOMA. 'We have got to repeal DOMA and have got to make sure
it accomplishes for federal purposes allowing the federal government to
recognize same-sex marriages,' said Nadler, who led the fight to defeat a
Federal Marriage Amendment that would have enshrined the same-sex marriage ban
in the U.S. Constitution. 'The time for dumping DOMA is long
overdue.' HRC President Joe Solmonese said it makes sense to restrict
the debate over repealing DOMA only to recognition of same-sex marriage. 'We ought to start it with what we would ultimately
achieve, a wholesale overturning of DOMA,' he said. Nadler said that including domestic partnerships or civil
unions in his legislation 'gets very complicated' because the laws
governing such legally recognized relationships are "different in every
state." Also, he said it would cloud the legislation's end goal, which is
ensuring all Americans, regardless of their sexual orientation, have the right
to marry."