Washington's domestic partnerships law, scheduled to go into effect on Sunday, was blocked by anti-gay activists who turned in signatures for Referendum 71 on Saturday. If enough are valid, the referendum will be put on the ballot and would repeal the "everything but marriage" measure. 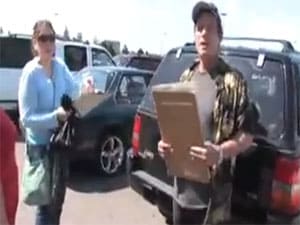 "The signatures for Referendum 71 were turned in to the Washingtonstate secretary of state's office Saturday afternoon. The new expandeddomestic partnership law was scheduled to take effect Sunday, but isnow delayed until the signatures can be counted. To qualify for the November ballot, they must have 120,577 validvoter signatures, and election officials have suggested that referendumsponsors turn in about 150,000 as a buffer. If they have enough signatures, the law will be delayed until the outcome of the election. The signatures were turned in a day after opponents of the new lawannounced a final push to force a public vote, calling their effort sofar 'too close to call.' In a statement to supporters, organizers of the Referendum 71campaign said that it was "too close to call" and that they neededpeople to show up on Saturday at the Capitol to turn in theirsignatures. The new 'everything but marriage' expansion of domestic partnershipsis scheduled to take effect Sunday, but the law will be delayed ifreferendum sponsors turn in their petitions."

Some folks are claiming that Referendum 71 backers used fraudulent methods to obtain signatures. Driving Equality blog claims to have evidence of it on video.