The Washington Post has published an interesting piece about activist Mark Segal and how his protest during a December 1973 broadcast of the CBS Evening News with the late Walter Cronkite changed both Cronkite's mind about reporting on gay rights and forever shifted network news approach to it. 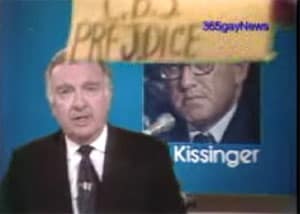 Segal, who interrupted Cronkite's broadcast with a sign reading "Gays protest CBS prejudice" and was subsequently wrestled to the floor and taken away, later subpoenaed Cronkite to testify in the court case over his trespassing charges.

When the trial began in April 1974, Cronkite took the stand, but CBSlawyers objected each time Segal's lawyer posed a question. During arecess, Segal felt a tap on his shoulder. "Why did you do that?"Cronkite asked about the incident in the studio.

"You're news censors," Segal responded. The anchorman was appalled."If I can prove it," Segal then asked, "would you do something tochange it?" He cited three examples, including a CBS report on thesecond rejection of a gay rights bill by the New York City Council."Yes, I believe I wrote that story myself," Cronkite said.

"Well, why haven't you reported on the 23 other cities that havepassed gay rights bills?" Segal asked. "Why do you cover 5,000 womenwalking down Fifth Avenue in New York City when they proclaimInternational Women's Year on the network news, and you do not cover50,000 gays and lesbians walking down that same avenue proclaiming GayPride Day? That's censorship." Genuinely moved, Cronkite shook Segal'shand and thanked him.

Said Segal of Cronkite: "He was the kind of man who believed in human rights for everyone. I am amazed and humbled by his willingness toreach out to me. He was a bridge between the gay movement and majormedia. We remained friends, and it was a privilege knowing him."

I've posted 365gay's report on the broadcast moment, AFTER THE JUMP…