One of the nation's most preeminent scholars on African-American history, Henry Louis Gates Jr., was arrested at his home in Cambridge, Massachusetts last week in a bizarre incident which bears many of the hallmarks of racial profiling. 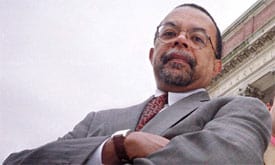 The NYT reports: "Professor Gates, who has taught at Harvard for nearly two decades, arrived home on Thursday from a trip to China to find his front door jammed, said Charles J. Ogletree, a law professor at Harvard who is representing him. He forced the door open with the help of his cab driver, Professor Ogletree said, and had been inside for a few minutes when Sgt. James Crowley of the Cambridge Police Department appeared at his door and asked him to step outside. Professor Gates, 58, refused to do so, Professor Ogletree said. From that point, the account of the professor and the police began to differ."

The incident ultimately led to Gates being handcuffed and detained at the police station for four hours. Harvard Law School's statement offering an account of the incident, AFTER THE JUMP…

Professor Gates was taken to the Cambridge Police Station where he remained for approximately 4 hours before being released that evening.  Professor Gates’s counsel has been cooperating with the Middlesex District Attorneys Office, and the City of Cambridge, and is hopeful that this matter will be resolved promptly.  Professor Gates will not be making any other statements concerning this matter at this time.