White House Chief of Staff Rahm Emanuel just said, "The goal is to have a means and a mechanism to keep the private insurers honest. The goal is non-negotiable; the path is [negotiable]." 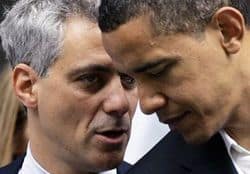 His comments, in a Wall Street Journal interview, indicate that the Obama Administration would be open to health care reform without a government-run public option, the exact opposite message from New York Senator Charles Schumer, who on Face the Nation Sunday said he would fight for such an option.
"Make no mistake about it, the president is for it strongly. There will be a public option in the final bill," Schumer stated.
This comes after President Obama publicly scolded advocacy groups for attacking conservative Democrats who take money from the health industry and who are therefore leaning against the public option. Seems to be a case of broadcasting what you're willing to do without.
Not a very strong negotiating tactic.
After the jump, a short video giving the public the option of making a @#$! call or two to Emanuel…