15-year-old Brandon McInerney pleaded "not guilty" Thursday to first degree murder and other charges in the shooting of his classmate Lawrence King in February 2008, the Ventura County Star reports: 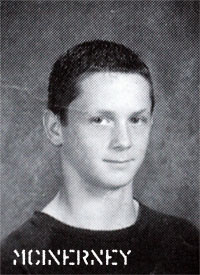 "McInerney, 15, who is being prosecuted as an adult, was accompanied
by his attorneys in Ventura County Superior Court as he formally
received the criminal charges against him. His arraignment had been
postponed repeatedly since the February 2008 shooting. Ventura County Superior Court Superior Court Judge Bruce Young set a pretrial hearing for Oct. 23 and a trial date for Dec. 1. After the arraignment, Senior Deputy District Attorney Maeve Fox
said she doesn’t know whether McInerney will be tried in December. 'Your guess is as good as mine,' she said. McInerney’s lawyers, Scott Wippert and Robyn Bramson, filed a legal
motion Thursday to dismiss the special circumstance of lying in wait
that was tacked onto the felony criminal charges by prosecutors after a
three-day preliminary hearing."

According to the paper, a "lying in wait" circumstance automatically transfers the case from juvenile to adult court. Since McInerney is being tried as an adult already, Fox argued that the point is moot. Prosecutors have offered a 25 to life deal if McInerney pleads guilty to first-degree murder and a hate crime. McInerney faces 53 to life if he refuses.