Florida Governor Charlie Crist half-joked to a group of real estate agents that the state's lack of hurricane activity is because God is listening to him: 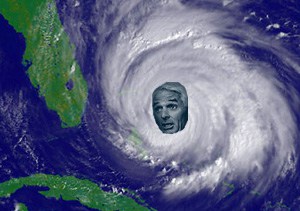 "Crist said he isn't trying to take credit, but he told a group of real estate agents Friday that he's had prayer notes placed in the Western Wall in Jerusalem each year and no major storms have hit Florida.

Crist noted that just before his election in 2006, Florida had been affected by a total of eight hurricanes in 2004 and 2005. 'Do you know the last time it was we had a hurricane in Florida? It's been awhile. In 2007, I took my first trade mission. Do you know where I went?' said Crist, a Methodist, referring to a trip to Israel.

He then told of going to the Western Wall and inserting a note with a prayer. He said it read, 'Dear God, please protect our Florida from storms and other difficulties. Charlie.' …'Time goes on – May, June, July, August, September, October, November, December – no hurricanes,' Crist said. 'Thank God.'

Last year, Sen. Nan Rich was traveling to Israel and Crist asked her to put a note in the Western Wall, a holy site in Judaism and a place where written prayers are traditionally placed.' It was the same note, by the way, the same prayer,' Crist said."

Wonder if Crist used that power to pray a few other things away as well?

Previous Post: « Lutherans Vote to Lift Restrictions on Gay and Lesbian Clergy
Next Post: CNN Reports on Torture and Executions of Gay Iraqis »